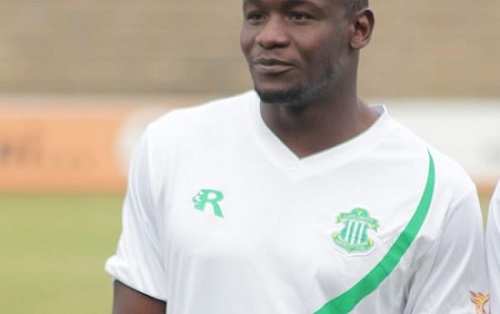 Hwange F.C suffered a humiliating one nil defeat at the hands of Caps United in a mid-week Castle lager encounter at the Colliery.

The drab match had all the fore tellings of shared spoils but through superb predatory skills substitute Chungwa broke the dead lock by latching onto a rebounded Chrispen Machisi header to thump one past a napping London Zulu.

From kick off Caps made their intentions transparent but kept failing to cut through a rather compact Hwange defense with the hosts almost capitalizing through the counter attack veteran striker Gilbert Zulu almost catching Caps goal minder Jorum Muchambo flat footed as Zulu pounced onto a Rodwell Chinyengetere dummy to blaze wide.

Midway through the first stanza Caps were close to making headway of their efforts as Carlton Muzambwa cut through the Hwange rearguard through some silky foot work to feed Moses Muchenje who failed to punish the hosts by hitting a soft shot straight into Zulus hands.

Caps seemed to have found a new zest as they tormented Hwange in the closing stages of the first half, Hardlife Zvirekwi coming close to grabbing the opener as he stormed into the HWange box to send a stinging shot straight at the right upright whilst leaving Zulu for dead.

A rather timid Hwange responded through a deft overhead kick from Gilbert Zulu to give little trouble to Caps, Joel Ngodzo’s overcooked pass was miles ahead of Phineas Bamusi who had peeled away from his markers  with only Zulu in front of him concluded the first half which was punctuated by Justice Jangano’s nose injury.

The second half began in the same vain as a midfield contest with Hwange almost getting the first goal in the 58th as Tafara Chese played a deft pass to Innocent Mucheneka who disappointed the home fans as  his shot lacked the power or zest to trouble Muchambo.

Caps dominated a greater part of the half but kept failing to capitalize on some set pieces conceded by an under pressure Hwange, after settling in Hwange turned the tables to the rather evenly

matched game with a half volley from Zulu flying wide in the 60th. With both camps resolved to a goalless draw Dominic Chungwa and Chrispen Machisi proved to be the missing pieces of the puzzle as both second half substitutes proved effective in collecting results for the visitors.

With Caps in the lead Hwange cut a frustrated shape with the visitors adding salt to the wound by resorting to delaying tactics while running  the clock down.