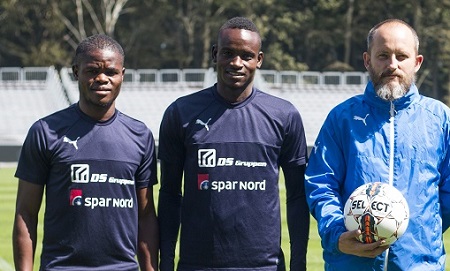 Zambian international Obrey Chirwa (left in pic above) aborted his move to Danish club Hobro IK and returned to FC Platinum because of monetary issues.

Although neither the player nor the club officials was at liberty to divulge the reasons, a source close to the player said the money he was offered was not much different from the one he was getting at FC Platinum.

“The club offered him a salary which was around $2000 which was not much of a difference from what he was getting at Platinum,” said the source.

FC Platinum are one of the best playing clubs in the country with highest paid players getting around $1500.

Chirwa capped his return with a fine performance scoring a brace which helped his club move into second position and will likely be a key player as FC Platinum gun for their maiden title.