In the Castle Lager Premiership today FC Platinum were held by Tsholotsho to a goalless draw. Norman Mapeza’s were frustrated by the home side Tsholotsho who were happy with a point as they continue to battle to avoid relegation .

While FC Platinum missed out on an opportunity to take advantage of any slip ups by Dynamos and Chicken Inn tomorrow.

At Ascot Stadium Chapungu hammered Buffaloes 4-1. Tinei Chitora grabbed aa brace for Chapungu while Farai Banda scored an own goal. Allen Tavariwsa had given Chapungu the lead in the first half.

Buffaloes got a late consolation through Hillary Madzvivanyika.

At Rufaro Stadium Triangle and Harare City played out a goalless draw. Triangle blew a great chance to get ahead just before half time when Ronald Mudimu had a penalty save.

In an early kick off ZPC Kariba edged Flame Lilly 1-0 .Dennis Dauda scored the all-important goal for the visitors with a powerful header.

Though ZPC Kariba controlled the game they made life difficult for themselves when Tawanda Muyanduri got himself sent off for a second yellow after arguing with the referee.

Flame Lilly had a ball saved on the line in added time but ZPC Kariba held on for another win. 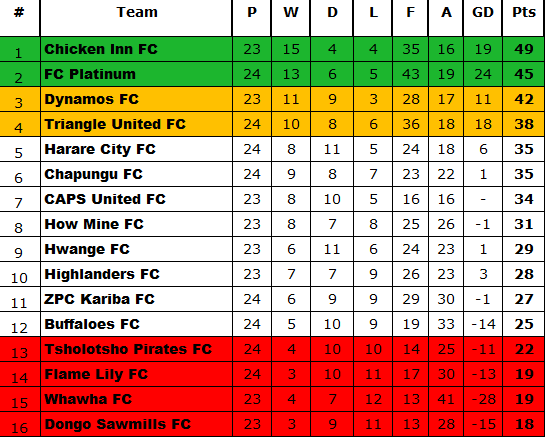