Watch: Soccer ref in Brazil pull a gun on players during an argument 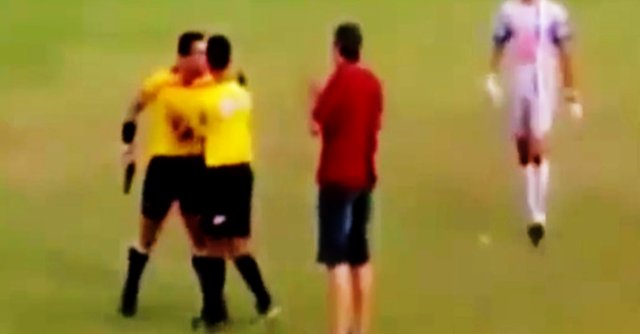 During a soccer game near the Brazilian city of Belo Horizonte last weekend, a player from the team Amantes da Bola (Lovers of the Ball) assaulted the game referee, Gabriel Murta, 27, after he did not call a red card on the opposition after a hard foul.

According to NPR, Murta, also a local policeman, walked off the field and grabbed his gun and pointed it at the player who had hit him.

In a YouTube video shot by a spectator, the player who hit Murta is seen running off the field as Murta chases him with a gun. A linesman stepped into the way to restrain Murta and calm the situation.

According to Yahoo Sports, the Brazilian referee will be sent to a psychologist to determine the appropriate punishment.

“On the basis of that conversation and his account of events and the results of the psychological assessment I’ll decide what if any measures to take,” said Referees’ association boss Giuliano Bozzano.

“What’s happened is obviously not a common occurrence and I don’t want to rush into anything.

“At the moment it happened he’s opted for getting his gun because in his view it was a question of controlling a situation.”