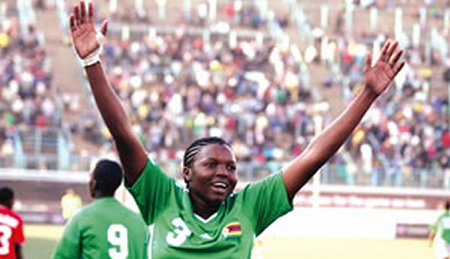 Sports Minister Makhosini Hlongwane has come to the rescue of the Mighty Warriors by mobilizing funds for the Olympic qualifier trip to Yaunde, Cameroon.

The trip was now in doubt after the team failed to leave for Cameroon yesterday but the new Sports Minister has assured the nation that the team will leave today.

In an interview with the Herald, Mahlongwane confirmed that they have secured funds for the trip.

“I met the women football leadership and we mobilised the resources to enable the Mighty Warriors to travel to Cameroon,” the Minister said.

The Minister, in a statement published through the Herald, said he was fully behind the Mighty Warriors after meeting the team in the capital.

“Firstly I would like to congratulate for having come this far in the qualification process for the 2016 Rio Olympics.

“I am aware that you have so far played against Zambia and that the match against Ivory Coast was decided in our favour without kicking the ball.

“Nonetheless the fact that you accounted for Zambia indicates that your team is competitive enough to return a good result in Cameroon. Your preparations have, to some extent, not been made under the most favourable conditions for various reasons.

“However, as Zimbabweans, we are known for our resilience and for our fighting spirit. As the name of your team suggests, you are not only Warriors, but Mighty Warriors, and the challenge before you is to vindicate that name by bringing back results notwithstanding any adversities.

“As Minister of Sport and Recreation, I want to assure you that my Ministry, as is the case with the legion of Mighty Warriors fans nation-wide, will be behind you as you do duty for your beloved country. I encourage you to go out there and give your best for your country, and be good ambassadors of Zimbabwe through exemplary conduct on and off the field of play.

“I would have loved to travel with you, but I am just 9 days in the office and my hands are full at the moment. This is my game and so and I would want you to win it for me. There is nothing indomitable about the Cameroonians.

“So, I don’t want you to be intimidated. With the right players on the field of play and the right focus, you should give us reason to smile and believe in our football again.

“Finally, on behalf of the Head of State and Government, Cde R G Mugabe, the nation of Zimbabwe, my Ministry and on my own behalf, I wish you all the success in your endeavours.”