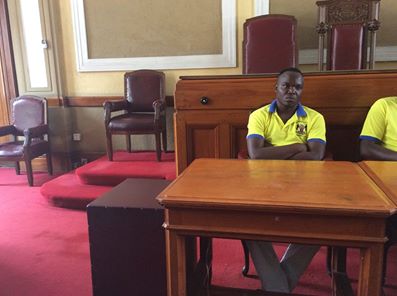 Pic: Nyamupanedengu at a press conference

Its common that football clubs’ facebook pages report with bias towards their team in their match reports.

Harare City happens to be one of the few clubs that have an active facebook page. After their match against Dynamos which City denied Dynamos all 3 points thereby denting Dembare’s title aspirations, they praised goalkeeper on his saves to earn them a point.

Harare City admitted Dynamos could have easily run away with a harvest of goals but have their goalkeeper to thank.

City’s goalkeeper Nyamupanedengu produced a one man show denying Dynamos a goal in their numerous attempts. As such the player was showerd with praise from both the Harare City camp and all the parties who care to see the Dynamos Camp lose.

I don’t care. I don’t to care. Even if somebody cares, I still don’t care. And if someone else insists or Dynamos faithfuls care I won’t bother caring, Maxwell Nyamupanedengu was the difference between zero points and the one Harare City earned at Rufaro against Dynamos in this matchday 25.

So perfect was Nyamupanedengu that all who watched the match could not help but name him as the man of the match. For me it was not just that he was imperious, he was in fact a collosus between the sticks.

Dynamos could have buried at least five goals in the first half but somehow the keeper showed he was top quality. The goalless draw was down to Nyamupanedengu and his unbelievable reflexes to stop all Dynamos threw at them. Mutuma, Chitiyo, Mushure and Chinyama all had their eyes popping as they watched Nyamupanedengu save their sure goal bound shots.
This is one draw of the 12 in which City feels it was like getting out of jail. And the warden was none other than Nyamupanedengu. City now have 36 points going into the international break next week to allow for Zimbabwe to play Lesotho at Barbourfields in the CHAN qualifier before resuming the charge for the league honours.

The first match between the two sides at the same venue finished goalless. But wait a bit, the two sides meet again in the Chibuku Super Cup final on October 31. And one thing is guaranteed, Dynamos would not fancy facing Nyamupanedengu in such purple form.