Chicken Inn edged closer to their first league title after coming from behind to draw with FC Platinum at Luveve Stadium.

FC Platinum opened the scoring in the 15th minute after a quick start by both teams.

Five minutes after the halftime break Chicken Inn equalised through Clemence Matawu to make it 1-1.

FC Platinum were reduced to ten men in the 72nd minute when Brian Muzondiwa was sent off for a second yellow card.

Neither team were able to add more goals after.

The result favours Chicken Inn who remain four points ahead of second placed FC Platinum with four games to go.

While Dynamos still have an outside chance trailing Chicken Inn by six points.

Highlanders needed a Knox Mutizwa penalty to equalise after Chapungu had lead through Philip Marufu’s goal in the 38th minute.

Mutizwa’s goal helps him move onto 12 goals one ahead of Chicken Inn’s Edmore Chirambadare. 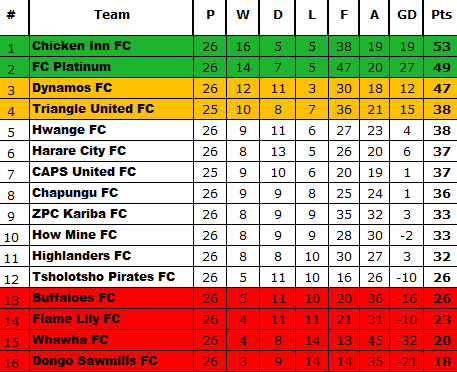