In the Castle Lager Premiership today Chicken Inn saw their lead at the top reduced to just two points.

The Gamecocks were held to a 1-1 draw by relegation bound Whawha at Ascot Stadium.

Whawha took the lead through FC Platinum loan striker Nelson Maziwisa,who gave his side the lead despite the dominance of Chicken Inn for most of the first half. Chicken Inn though kept on pressing and equalised on the 90th minute through Toto Banda.

The teams went into halftime with the score at 0-0 but Norman Mapeza’s side scored in the 55th and 66th minute through Nigel Papias and Marshall Mundehwe to get the maximum points.

In other games ZPC Kariba came from behind to draw 1-1 with Chapungu while How Mine and Flame Lilly played out a goalless draw at Luveve Stadium. 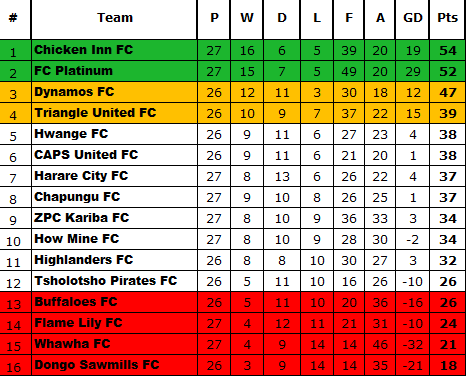