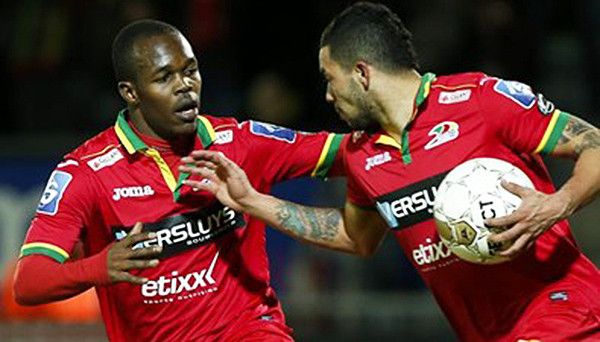 Zimbabweans plying their trade in foreign leagues had a tough weekend, here is a round up of how they performed in leagues across the ciuntry

Knowledge Musona (KV Oostende, Belgium)
Musona was on target in a losing cause as KV Ostende slumped to a 2-1 defeat against Mechelin. Musona scored the equalising goal through the penalty spot in the 55th minute. Mechelin had gone ahead in the 25th minute, They eventually scored the winner in the 81st minute through a late sub. The loss means Oostende drops from pole position to number 3 on the latest Belgian Pro League.

Costa Nhamoinesu (Sparta Praha, Czech Republic)
Nhamoinesu played the entire match at the heart of defence as his team lost 1-0 against Slovan Liberec. The loss also means Sparta Praha surrender top spot to bitter rivals Victoria who registered a win to put them ahead.

Marvelous Nakamba (Vitesse, Netherlands)
Nakamba had to watch from the stands as he served his 1 match ban for the Red card he earned 2 weeks ago. His team drew 2-2 against ADO Den Haag.

Silas Songani (SønderjyskE, Denmark) Songani who appears to be struggling to get game time, came on as an 84th minute substitute in SønderjyskE’s 2-1 win over Nordsjælland.

Tendayi Darikwa (Burnley, England)
The tough tackling defender played the entire match in his team’s 1-1 draw with Brighton & Hove Albion. Burnley are still well on course for Premier League qualification as they are just 2 points away from top placed Hull City, though they are on 5th position in what will be a tightly contested Championship.

Macauley Bonne (Colchester United, England)
The younger Striker played the entire match as his team got thumped 4-1 by Millwall.