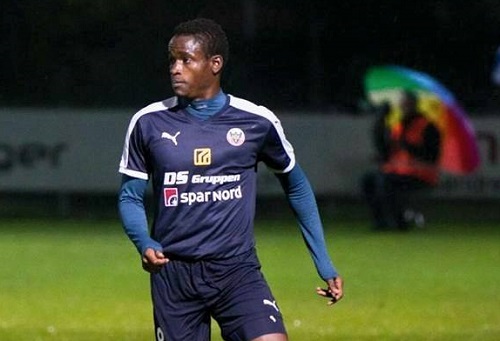 Zimbabwean international Ronald Pfumbidzai could be heading back to CAPS United after his switch to Danish side Hobro IK turned sour.

Pfumbidzai signed a one year contract with the club in June but is yet to play for the Hobro 1st team squad this season.Hobro currently anchor the 12 team log table after 16 games.

A source close to Pfumbidzai told Soccer24 that the left back has had a miserable time in the country and is set to make a return ‘back home’.

“Things have not gone done well with Pfumbidzai and he will back in Zim by January the source told Soccer24. “He is quite angry things didn’t go according to plan and he is set to return likely to CAPS United .  Pfumbidzai is also not happy with Quincy Antipas and his company who facilitated the move added the source.

He (Pfumbidzai ) says Quincy and his company were not transparent on the deal.

With CAPS United now more stable Pfumbidzai is understood to be keen on getting back to playing compeptive football again and targeting another move later in 2016.

Pfumbidzai’s potential return comes after FC Platinum forward Obrey Chirwa who was also signed by Hobro IK made a U-turn over money issues and came back to Zimbabwe.

Chirwa was reportedly unhappy with the salary he was set to get there and made his way back to FC Platinum who are one of the best playing clubs in the ZPSL.