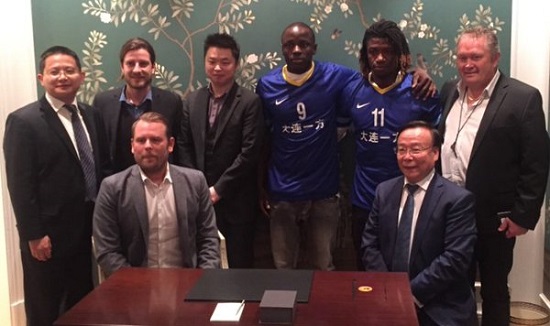 Dalian Yifang currently play in the second tier of Chinese football, The China League One.The club was founded in  in  2009 by the Dalian Aerbin Group which still owns the team .They are based Dalian, Liaoning

Mushekwi completed his move today and was presented as a Yifang F.C player in a reported big money deal according to Swedish media that marks the end to his Sundowns career.

Mushekwi has been keen to leave Sundowns and had been increasingly frustrated by the club’s reluctance to let him go. But with his contract coming to an end next year Sundowns were keen to cash in on Mushekwi .

The deal is was brokered by top Swedish agent Patrick Mörk (extreme right on pic) who also confirmed the deal.

Despite a fine spell as Swedish club Djurgarden FC Mushweki did not continue his loan spell and headed back to South Africa where he had been training.

Mohamed Bangura who turned out for Swedish giants AIK was also signed and presented alongside Nyasha Mushekwi .

Get local and international football news delivered straight to your mobile phone via the Soccer24 app available on the Google Play Store below: