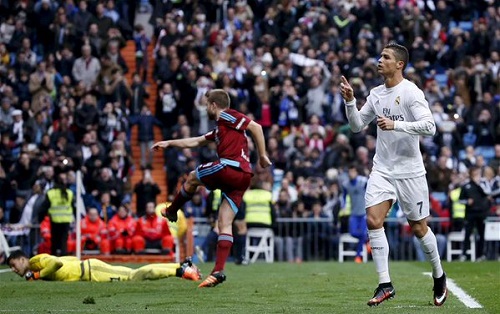 The win was a huge relief for under fire Real Madrid head coach Rafa Benitez who was whistled by fans even before kickoff.

Real Madrid got awarded a penalty in the 24th minute after the Karim Benzema was brought down but Ronaldo hit the spot kick over the bar.

Ronaldo then made amends for his earlier miss when Madrid had another penalty in the 42nd minute despite protests by Real Sociedad over the decision.

However in the 67th minute Ronaldo scored his second to put his side back in front. Gareth Bale then did well to set up Vazquez for the third goal for Real Madrid.

The win moves Real Madrid into top spot but having played a game more than second placed. Altetico Madrid and two games more than Barcelona