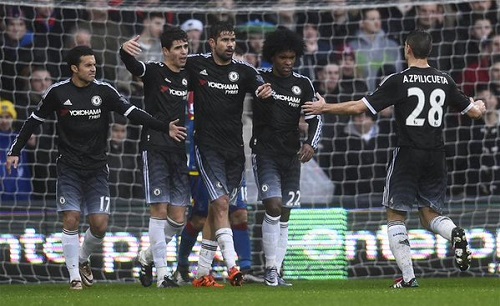 Brazilian international Oscar opened the scoring in the 28th minute after being set up well by Diego Costa who made a fine run into the penalty area.

Halftime came with Chelsea  in front and playing with renewed confidence.

On the half hour mark Chelsea were 2-0 in front when Willian unleashed a shot that beat Hennessey in goal for Crystal Palace.

Six minutes player Costa made it three when the Crystal Palace goalkeeper fumbled Willian low shot. The ball fell into the path Costa who scored from close range.

The win moves Chelsea into 14th place and the Blues are yet to lose since Guus Hiddink took over from Jose Mourinho.