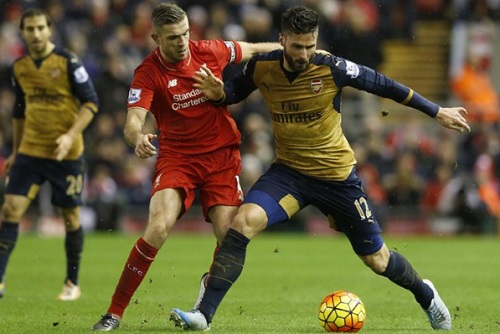 There were plenty of goals and in the English Premiership last night.

Arsenal and Liverpool played out a thrilling 3-3 draw at Anfield .Roberto Firmino and Oliver Giroud both scored a brace. Liverpool took the lead in the 10th minute but Arsenal equalised 4minutes later through Aaaron Ramsey.

The Gunners equalised again after Liverpool had taken the lead before Giroud put Arsenal in front in the 55th minute.

Liverpool pushed for an equaliser and were rewarded in the 90th minute when Joe Allen scored.

At Stamford Bridge West Brom came from behind twice to draw 2-2 with Chelsea. Azpilicueta gave Chelsea the lead but Craig Gardner cancelled the effort in the first half. A Gareth McAuely own goal restored Chelsea’s lead but 4 minutes from full-time James McClean made it 2-2.

Manchester City played out a goalless draw with Everton while Leicester went joint top with Arsenal after clinching a late win against Tottenham.