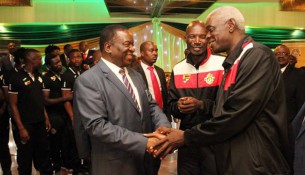 Speaking at a sendoff party hosted by the Ministry of Sports and Recreation last, The Vice President encourage the Pasuwa led team to do well and better their fouth place finish last time and go all the way to win the Cup.

“we recognise that while qualifying is a feat which most countries look forward to, for us, competing at this prestigious continental event is now tradition, which saw the Warriors attain fourth place in the 2014 tournament. The challenge, before us, is to now win the championship.” He said

The tournament kicks off today with hosts taking on Morocco. Zimbabwe Warriors are scheduled to depart today and will play their first match in Group D against rivals Zambia.