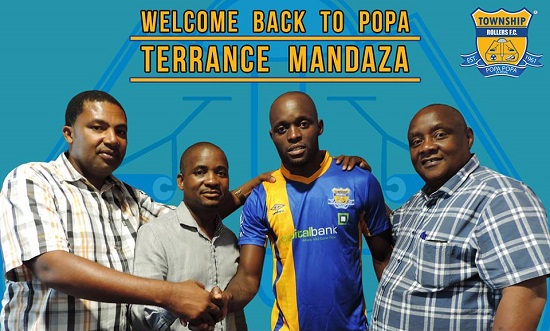 Mandaza left Rollers in 2010 for ABSA Premiership side Platinum Stars after scoring an impressive 42 goals during the 2009-2010 Botswana Premier league season. He remained in South Africa until 2015 turning out for Maritzburg United as well. He left South Africa for Thailand based side Chiangmai FC after his contract expired with Maritzburg.

Mandaza expressed his delight on returning to Rollers saying “I am honored to be back with Township Rollers, I have learnt a lot with Rollers before, especially it’s great to be back with familiar faces here with whom I played and learnt a lot before during my stay in Botswana.

“The fan support for me here has always been marvellous. I am thrilled and have returned to continue with Popa from where I left before in 2010.

Mandaza has had some call ups for the Zimbabwe national team with his first coming in 2010 when he made his Warriors debut.

Township Rollers are currently in second place in the Botswana Premier League after 19 games. They are coached by former CAPS United head coach Mark Harrison.