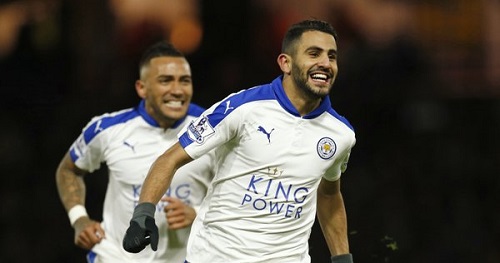 In English Premiership today there were wins for Leicester and Arsenal while Chelsea had to come from behind to draw.

Leicester opened up a 8 point lead at the top after edging Crystal Palace 1-0 .Algerian international Riyad Mahrez got the all important goal in the 34th minute. The wins keeps Ranieri’s team in a comfortable position though they have played one more game than closest rival, second placed Tottenham who are in action on Sunday.

Arsenal returned to winning ways and keep their title hopes alive with a 2-0 win over Everton. The Gunners scored the two goals through Danny Welbeck and Nigerian international Alex Iwobi.

At Stamford Bridge Chelsea were forced to come back twice to draw 2-2 with West Ham. Manuel Lanzini gave the Hammers the lead but Cesc Fabregas equalised just before halftime.

Andy Carroll then restored the lead for West Ham. On the 88th minute mark Chelsea were handed a penalty after Loftus Cheek was clipped by Antonio in the box. Fabregas then stepped up to equalise.The draw leaves Chelsea in 10th spot on 40 points