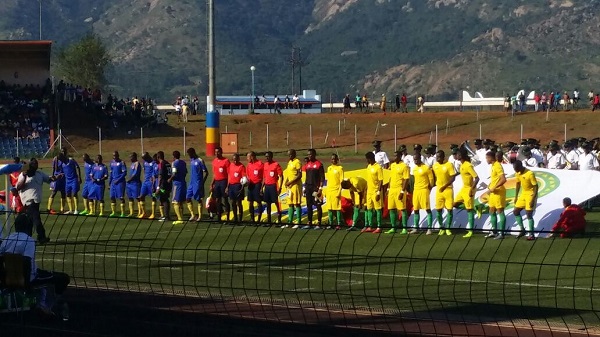 The Zimbabwe national team played out at a 1-1 draw with Swaziland at the  at the Somhlolo Stadium this afternoon.

Zimbabwe had Tatenda Mukuruva to thank after he made a string of key saves towards the end of the match to ensure Zimbabwe came out with at least a point.

The Warriors had a bad start with Swaziland taking an early lead after some poor defending. Swaziland launched a quick break and crossed the ball from the left wing to find an unmarked Felix Badenhorst who headed in with Eric Chipeta nowhere to be seen.

Two minutes later Matthew Rusike got Zimbabwe’s first attempt on goal but could not keep his shot down.

Eventually the Warriors settled into the match and started dominating proceedings .However despite the greater possession the four man striker opted by Callisto Pasuwa struggled to get goals.

On the 35th minute mark Musona was fouled and Onismor Bhasera’s quick free kick was saved.  Zimbabwe struggled with cohesion and fluidity as the game progressed preferring to just kick the ball in the forward ,losing possession in the process.

However just before the halftime break Zimbabwe equalised and its was Swaziland gifting the Warriors.Musona’s corner was turned into goal by Swazi defender Njabulo Ndlovu as he attempted to clear. Halftime came with the scoreline level.

Zimbabwe had a very bright start to the second half. Musona forced a good save with a curling effort before Swaziland were forced into defending moments after and hit the bar in attempt to clear the ball away from goal.

However as the game progressed it was the home side that took the initiative. In the 76th minute Mukuruva was saved after a well taken corner kick before keeping out a shot from outside the box.

On the 88th minute Swaziland came even closer when Danny Phiri conceded a free kick which saw as stunning save for Mukuruva to deny Swaziland again.

However the points were to be shared as the game ended in a 1-1 draw. Zimbabwe will need to improve ahead of the next match in Harare on  Monday if they are to beat Swaziland and keep their hopes of a third AFCON qualification alive.