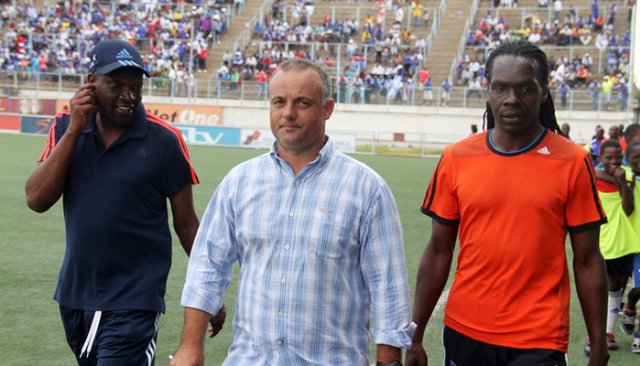 Dynamos goalkeeper coach Gift Muzadzi has hit back at allegations that he has been trying to sabotage the former league champions to get head coach Paulo Jorge Silva.

Muzadzi and Silva have a had a frosty relationship since pre-season and following the goalless draw with Triangle the Portuguese mentor hinted that there could be people within his technical team and players that didn’t want to win.

Dynamos have registered a point from their first two games and haven’t scored any goals this season.

Things turned ugly after the match with fans denouncing both Muzadzi and team manager Richard Chihoro who they accused of sabotage urging club President Kenny Mubaiwa to get rid of the pair.

However Muzadzi in an explosive interview with the Herald pointed the blame on Silva and hinted on racism at play from the Portuguese.

He is from Europe,yes but that does not give him the ticket to harass us said Muzadzi.”We have had whites before. This is not the first time we have seen football and his not discovering football either.

“He has created a lot of problems for the team, But people are now sabotaging the team.”How if I may? asked questioned Muzadzi.

Muzadzi also revealed that Silva had boasted of pocketing a $50 000 pay cheque if he was fired.

Muzadzi a former Dynamos player himself said he would not do anything to derail a club that had been part of most of his life and felt hurt by the accusations.