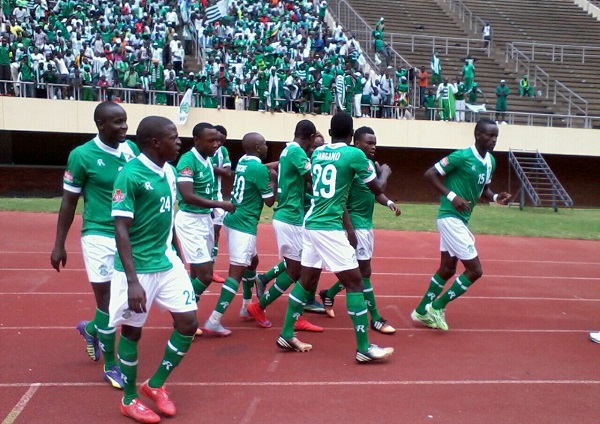 CAPS United finally beat rivals Dynamos in the league this afternoon at Rufaro Stadium. The Green Machine had not won against Dembare since 2009 but Dominic Chungwa’s solitary goal was enough to finally end the jinx.

The first half belonged to the home side Dynamos who created more to the chances and CAPS United had Jorum Muchambo to thank for making key saves.

Godknows Murwira forced a good face from Muchambo before Amidu also tested the keeper with an even better attempt.

Dynamos youngster Kudzanai Nyasaka almost came close to the opener as well after good exchanges with Mutuma saw him shoot only for Muchambo to save once again.

The half time break came with Dynamos with the edge.

In the 67th minute Dynamos had a great chance to go in front when they were awarded a indirect free kick after a back pass by CAPS United.

Ocean Mushure shot was blocked by the CAPS United defence. Minutes later CAPS United went in front ,Simba Nhivi’s shot after a corner was deflected and fell kindly to a free Dominic Chungwa who poked it in.

Four minutes later Chungwa had the ball in the back of the net but his effort was ruled out harshly for offside when two other CAPS United players did not appear to be interfering with play.

With the advtange CAPS United pressed even more launching more raids.At the other hand subsitiute Evans Gwekwerere almost equalised but his shot was blocked on the line although he had fouled Muchambo on his way.

The game had sad end with played stopped in added time after Dynamos fans threw missiles onto the pitch.Dynamos head coach Paulo Jorge Silva was also sent to the stands after clashing with the officials on the touch line.