Report: Dynamos continue to fire blanks with draw in Hwange 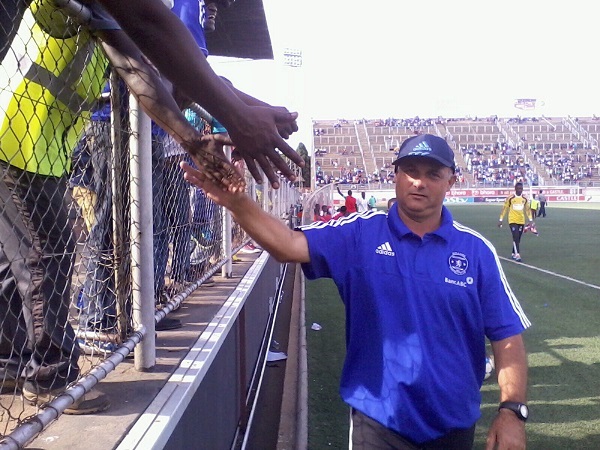 Hooliganism stole the show as it proved to be the highlight of a very drab goalless match between Hwange Football Club and Dynamos at the Colliery stadium.

The match almost came to stand still as a topless hooligan ran on the running track and threw a bottle filled with an unknown liquid behind the Hwange goal.

Coincidentally Hwange thought they had scored through Tonisani Sibelo who put one between the legs of Dynamos goal minder Tatenda Mukuruva only to see the linesman adjudge it as offside.

The Coalminers were on top in the first half but fluffed most of their chances as they failed to make any of their efforts pay off, visitors Dembare seemed to be a shadow of their former glamorous selves.

Hwange lacked confidence in front of goal with Collen Muleya sending a weak effort past the upright to register Hwange’s first effort on goal as late as the 9th minute.

A brief glimpse of attacking intent popped up as Pritchard Mupelele dinked a shot from out of the box only for it to be flicked out for a corner by an alert Mukuruva.

The first stanza fizzled off with the visitors trying to catch Hwange off guard as Dembare hit off a quick counter attack a quick forward pass by Ocean Mushure found Godknows Murwira who over cooked his shot to send the ball overbar.

In a low key first half, Hwange had the majority of possession, but there were no goals.

At the beginning of the second half a moment of controversy came when Gift Mbweti ghosted into the Dembare box only for Mushure to stop him with a calculated tackle that angered the home team and had fans screaming for a penalty in the 48th.

Dembare’s hopes seemed to rise with the inclusion of once deadly target man Evans Gwekwerere at the stroke of the 50th but his inclusion did not pay dividends as the Dembare midfield failed to provide him with the much needed ball, Gwekwerere cut out a lonely and awkward figure in attack, with his moment of brilliance a being a back heel pass only for him to get injured in a tussle for the ball with Gerald Ndlovu and having to be stretchered off the pitch.

Hooliganism scared the already poor game as fans began to invade the pitch with some pelting the police with plastic bottles, with parties from both teams begging their supporters to behave, the match however continued without stoppage.

Dembare came into the fray a little late as they applied pressure from the 74th but had left it too late to seek a goal with Hwange being equally resilient to resist their attack.

Hwange coach praised his charges for a match well played and highlighted that the team had played as per instruction.

“ The guys played as per instruction we went out for a win but we got the point through being organized” said Mebelo Njekwa.

Under fire Dynamos coach Paulos Silva left the pitch without a comment.

Report: Dynamos continue to fire blanks with draw in Hwange