In the Castle Lager Premiership today there were wins for Dynamos and FC Platinum while CAPS United came from behind to draw with ZPC Kariba.

Dynamos finally managed to register a second win of the season when they beat Tsholotsho 1-0 at Barbourfield Stadium.

Ocean Mushure scored from the penalty spot in the 6th minute after Farai Mupasiri had been brought down. Tsholotsho had good chances to get themselves back in the game but wasted their chances as Dynamos got a much needed win.

At Rufaro Stadium CAPS United showed good character as they came from 2-0 down to draw 2-2 against ZPC Kariba. Limited Chikafa scored the opener before an impressive Talent Chawapiwa who was a constant threat to the CAPS defence added a second .

However just like last weekend CAPS United put on a much better second half performance and were rewarded with Bamusi pulling one back before Leonard Tsipa equalised late into the game.

At Ascot Stadium Chapungu and Ngezi Platinum  shared the points after drawing 1-1.Xolani Ncube opened the scoring for Chapungu but Ngezi levelled matters through Knowledge Machona in the second half. 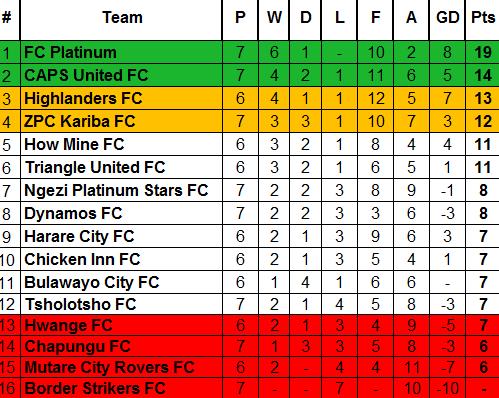