Gumbo off to winning start,while Highlanders draw with Harare City

In the Castle Lager Premiership today there were wins for Chicken Inn and Hwange while Highlanders drew with Harare City.

Rahman Gumbo got his tenure as Chicken Inn head coach off to a winning start when they beat Mutare City 3-1 at Sakubva Stadium.

Chicken Inn opened the scoring through Moses Demera but Mutare City equalised through Kuda Gurure in the 31st minute.

George Majika restore Chicken Inn’s lead in the 58th minute before Edmore Chirambadare rounded up off things with the third in the 83rd minute.At Barbourfields Stadium Highlanders had to come from behind to draw 1-1 with Harare City.
Martin Vengesayi thrust Harare City into the lead in the 20th minute but Highlanders striker Kasimero Chimbadzwa came off the the bench to score with 12 minutes to go. Highlanders thought they had won it at the end but had a late effort ruled out for offside. Highlanders remain in second spot after the result but now trail log leaders FC Platinum by five points

At the Colliery goals by Pervington Zimunya and Gift Mbweti gave Hwange maximum points against How Mine while Triangle and Bulawayo shared the points after drawing 1-1.
Lewis Ncube’s goal helped Bulawayo City level after Dzingai Chirambamuriwo had given Triangle the lead. 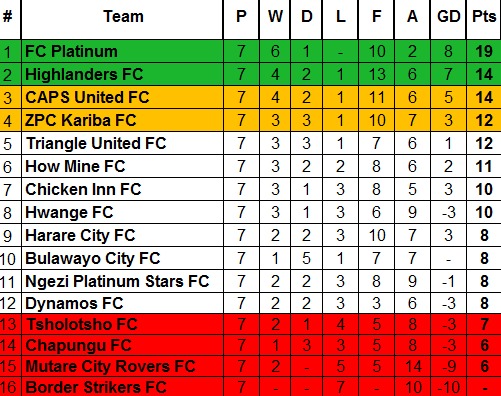