In  the Castle Lager Premiership this  afternoon CAPS United beat Chicken Inn while Border Strikers clinched their first set of points. There were also wins for Triangle,   Border Strikers and and ZPC Kariba.

At Luveve Stadium CAPS United opened the scoring through Brian Amidu but the lead was short lived as Edmore Chirambadare levelled matters just after the restart of play.

However Leonard Tsipa restored the lead and won the game with a header in the 49th minute.

The victory puts the Green Machine within two points of FC Platinum with the log leaders set to meet How Mine on Thursday.

At Maglas Stadium it was joy and jubilation for Border Strikers as they scored their very first goal of the season and picked up their first set of points with a 1-0 over Tsholotsho. The victory ended a woeful start to the top flight after suffering seven straight defeats before today’s game.

At Gibbo Stadium Triangle continued to impress at home when they beat Mutare City 3-1. Kawondera scored just after the halftime break while Nelson Maziwisa added a second. Simba Makoni then wrapped up the win with a third but Mutare City scored a consolation through Russel Madamombe.

In other matches Eddy Nkhlungo’s goal was enough for Bulawayo City to beat Ngezi Platinum while ZPC Kariba edged Hwange 1-0. 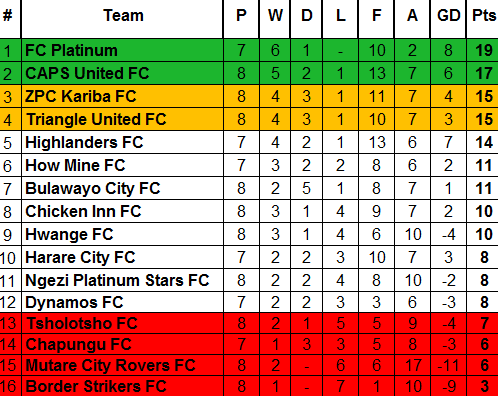