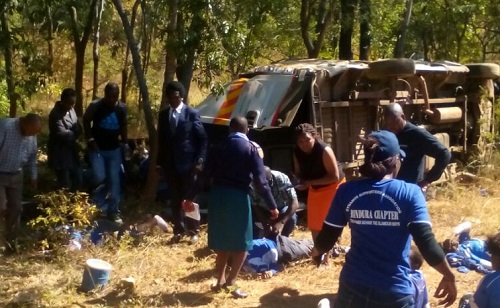 NFAZ president Philip Chiyangwa has passed his condolences to the Dynamos family following a road accident that claimed the lives of seven Dembare fans.

The fans lost their lives when the vehicle they were travelling for the Dynamos v Chapungu game at Ascot when their vehicle burst a tyre and veered of the road and rolled over three times.

“We are in mourning, our hearts are bleeding said Chiyangwa. “Fans are the ones who make football beautiful and losing some of them in this manner is really painful he added.

Minister of Sports and Recreation Makhosini Hlongwane also released a statement expressing shock at the tragedy.

“The Minister of Sport and Recreation is shocked by the loss of lives of Dynamos supporters who perished at Battlefields on their way to the Dynamos-Chapungu match in Gweru. The minister conveys profound sympathies to the families for the loss and condolences with them during this very difficult time said a statement.

Fellow ZPSL clubs also passed their condolences with CAPS United also saying they were griefing with their great rival. A statement from the club read:

On behalf of the president of Caps United Football Club, Gunners Football Club and Sports Avenues, the shareholders thereof, the Board of Directors, the CEO, staff, players, supporters and sponsors of the Green Machine and its associate entities, we convey our sincere and heartfelt sympathy to the Dynamos president Keni Mubayiwa, his board, executive, the entire team and the whole sporting fraternity following the unfortunate accident that claimed the lives of Dynamos supporters early this morning. We especially extend our condolences to their immediate families. This is our collective loss. We mourn with you. May their dear souls rest in eternal peace.