Dynamos march on while Ngezi stun How Mine

Dynamos recorded their fourth straight win this afternoon when they edged Bulawayo City in an exciting match at Barbourfields Stadium.

Despite the goal Bulawayo City remained very much in the game and came close just before the half-time break in grabbing an equaliser.

In the second half Mkhokheli Dube almost levelled while a penalty appeal was turned down. Bulawayo City will feel let down by the decision following another call that went against them last weekend against CAPS United.

In the end the home side failed to put away their chances as Dynamos held on for another three points.

Dembare seem to now have firmly put their bad start behind them and are back on track. Dynamos remain in 5th spot but are edging closer to the leaders ahead of other Week 12 matches on Sunday.

Across town at Luveve Stadium Ngezi Platinum left it very late to beat How Mine 2-1 . Ngulube gave How Mine the lead in the 13th minute but Tsepo Ranthokoane equalised in the 54th minute. With the tie heading for a draw Evans Katema struck in added time to give Ngezi Platinum maximum points.

At Nyamhunga Stadium ZPC Kariba were held to a goalless draw by a determined Chapungu side. 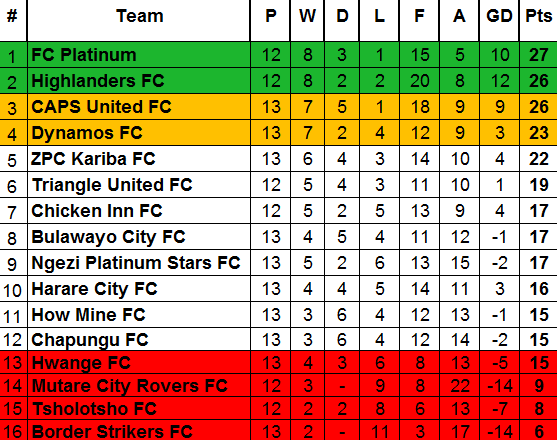