In the Castle Lager Premiership this afternoon both Highlanders and CAPS United dropped points.

Chicken Inn ended Highlanders unbeaten run and continued to cause problems for the Bulawayo giants when they won 2-0.

Obadiah Tarumbwa returned to haunt his former side when he struck in the first half before Clemence Matawu sealed the win with a few minutes to full-time.

Frustration reached its peak for Highlanders head coach Erol Akbay when he was sent off and ordered to go to the stands after pushing a Chicken Inn player he felt was wasting time.

At Rufaro Stadium CAPS United were made to rue their missed chances when they were held to a 1-1 draw by Hwange.

Justice Jangano’s speculative shot put the Green Machine in front and they had more chances to add to their lead but were let down by poor finishing.

Pervington Zimunya then made the Green Machine pay when struck the equaliser with a few minutes to go to share the points. The draw saw CAPS United blow a chance to take the top spot after Highlanders lost.

In other matches Triangle edged Tsholotsho at Gibbo Stadium with Lameck Nhamo scoring the all-important goal. 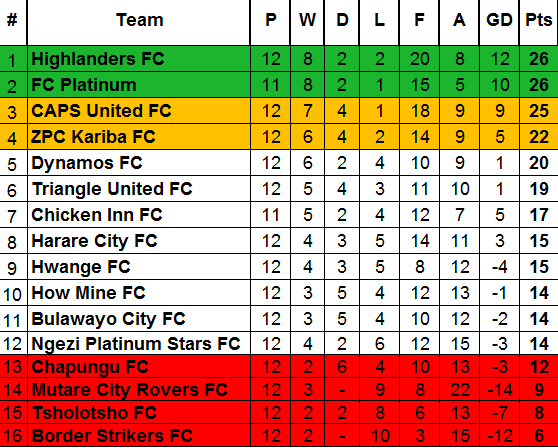