In the Castle Lager Premiership CAPS United returned to winning ways while Hwange stunned FC Platinum at the Colliery Stadium.

Making a return to National Sports Stadium CAPS United went ahead very early when Leonard Tsipa converted a penalty after Thandolwenkosi Ncube had handled. Returning keeper Edmore Sibanda made some good saves to keep CAPS United ahead as the half progressed.

In the 34th minute Moses Muchenje doubled the lead to ensure his side went into the half time break leading.

Tsholotsho failed to get themselves back into the game despite some chances in the second half while CAPS United could have added more goals with Tsipa and Chungwa not burying their opportunities.

However the first half goals were enough to take CAPS United to the top with  29 points.

At the Colliery an impressive first half display saw Hwange hand FC Platinum only their second defeat of  the season. Gift Mbweti struck two goals in the space of five minutes and FC Platinum never really recovered.

Rodwell Chinyengetere scored a consolation from the penalty spot while there was late drama as Hwange finished the game with ten men after Boriwondo was red carded.

At Nyamhunga Stadium Harare City got back to winning ways with a 1-0 win over ZPC Kariba with Ronald Chitiyo scoring the winner.

At Barbourfield Stadium Bulawayo City edged Border Strikers in an early kick off before Chicken Inn wasted good chances to play out a goalless draw with Ngezi Platinum who took  their unbeaten run to four games since Tonderai Ndiraya took over.

In the Lowveld Triangle left it late to beat Chapungu 1-0. Courage Denias struck with a few minutes till the full-time side to hand his side maximum points. 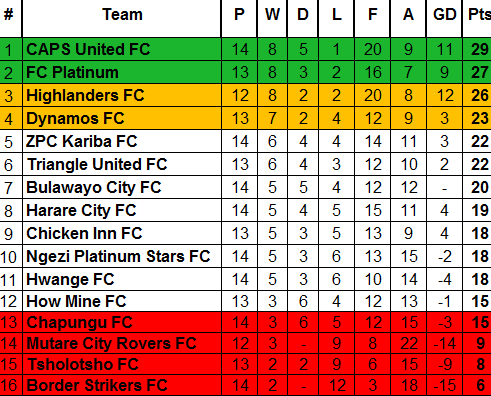