In the Castle Lager Premiership today FC Platinum were the only team to register a win as a lack of goals characterised the start of the second of the season.

Bulawayo City had better but failed to opportunities but failed to take them and the match looked set to end in a draw by Chinyengetere struck in the 88th minute to hand his side all three points.

The result sees FC Platinum open a five point gap at the top ahead of other Week 16 games.

At Nyamhunga Stadium Dynamos recorded their third straight draw when they played out another goalless draw with ZPC Kariba.

The home side dominated large parts of the game by controlling the midfield but Stephen Appiah and Limited Chikafa were guilty of not burying the chances that came their way.

Tatenda Mukuruva was kept busy for most of the game as  ZPC Kariba searched for the opener. Jacob Muzokomba was handed his Dynamos debut but was later replaced by Mukandi.

Denver Mukamba was introduced to try and bring much needed spark after replacing Simbarashe Gorogodyo and came very close in the second half but it was not to be his day either. Chikafa had a great chance to seal the win for ZPC Kariba but again was founding wanting in front of goal as the match ended goalless.

At Luveve Stadium Border Strikers were in front inside the first minute when Kudzanai Kwashi scored. How Mine got themselves back in the game with Praise Tonha equalising on the half-way mark. Pascal Manhanga wasted a glorious opportunity for How Mine when he failed to convert from the penalty spot.

In other matches Mutare City and Chapungu played a goalless draw at Sakubva Stadium. 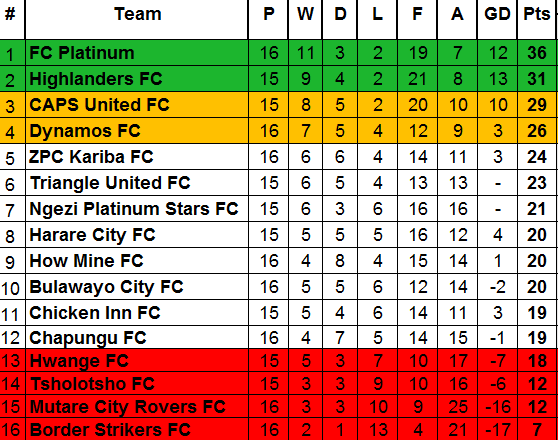