CAPS United close the gap as FC Platinum are held

CAPS United closed the gap on log leaders FC Platinum with a 1-0 win over Tsholotsho. Dominic Chungwa was again on the scoresheet as his second half goal handed his side a crucial three points.

Tsholotsho had held on for most of the game despite the dominance of CAPS United. In the 70th minute Chungwa finally broke the resistance when he scored from close range after Tsholotsho failed to deal with a cross.

With FC Platinum held at home CAPS United close the gap at the top two points. Nqobizitha Masuku put FC Platinum in the front on the 30th minute mark but Hwange were awarded a penalty after Elvis Moyo had handled. Gilbert Zulu scored to make sure the points were shared.

Ngezi Platinum continued with their impressive run under head coach Tonderai Ndiraya when they beat Chicken Inn 2-1 at Baobab Stadium.

At Rufaro stadium goals by Crispen Dickson and a late volley by Martin Vengesayi handed Harare City a 2-0 win over ZPC Kariba.

Bulawayo City got back to winning ways with a 1-0 over Border Strikes away to Beitbridge with Emmanuel Mandiranga’s early goal separating the two teams.

At Ascot Stadium an 13th minute own goal by Donald Dzvinyai handed Chapungu a 1-0 win over Triangle. 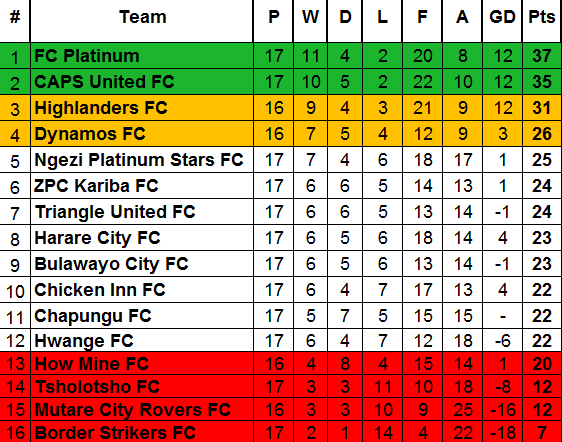