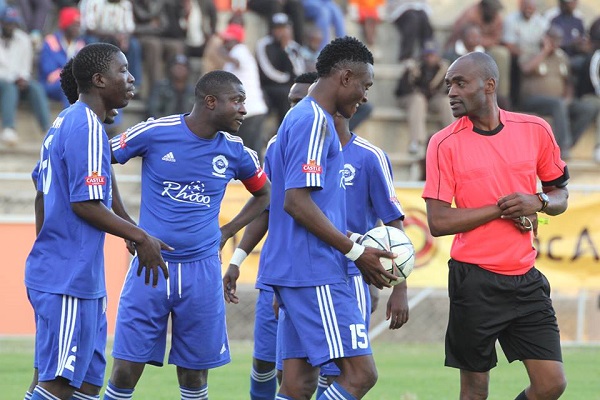 Dynamos went for a fifth consecutive match without a win when they lost 2-1 to Border Strikers at Dulivhadzimu Stadium in Beitbridge.

Dynamos had registered four goalless draws heading into the match and were keen to put an end to the poor run of form against the bottom side of the league.

But it was not to be with Border Strikers registering since the first home win since moving to Dulivhadzimu. Its the third win of the season for Border Strikers.

Border Striker frustrated Dynamos for most of the first half doing well to shut them out despite the visitors threatening.

Obey Mwerahari should have opened the scoring just before the half -time break but wasted his chance. Halftime came with the score line goalless

After the break Musunye though he had put Border Striker ahead when he put his effort in the back of the net but was blown for offside.

However the goal was to come when Clever  Mutendebure scored from a rebound to put Border Strikers ahead. The lead did not last long with Masimba Mambabre equalising for Dynamos six minutes later from a corner.

The goal added urgency to the Dembare attack as they pressed for more goals. But Border Strikers had other plans with William Nyoni restoring the lead with ten minutes left to full-time.

Dynamos were reduced to ten with just before full-time when Mukandi was given a red card after slapping Mwiinga in frustration.

It was a sweet victory for Border Strikes who remain bottom but now have ten points while Dynamos have now picked up four points from their last five games.

With Triangle beating Highlanders Dynamos’ fourth spot in under threat from the Lowveld based side who now have the same number of points but are 5th with a inferior goal difference.