Highlanders finally recorded a win when they beat How Mine 2-0 in a Castle Lager Premiership match played at Barbourfields stadium this afternoon.

Erol Akbay’s squad had gone six matches without a win but first half goals from Eric Mudzingwa and an impressive Allan Gahadzikwa ended the winless streak.

How Mine ended the match with ten men after Timothy January was sent off despite being on the pitch for a few minutes after using foul language.

Highlanders also had Amini Soma Phiri sent to the stand by the referee. Highlanders move back to third after the result.

Ngezi Platinum and Dynamos played out a goalless draw. Ngezi Platinum dominated the early proceedings but Dynamos got themselves back in the game as the first half progressed. Both Cris Mverchena and Tatenda Mukuruva were kept busy as  action swung from one end to another but neither side could break the deadlock.

At the Colliery Hwange and Triangle played out an eight goal thriller. Triangle took the lead in the 3rd minute from the penalty spot but Gilbert Zulu fired in two quick goals to put Hwange in front by the 13th minute. Innocent Mucheneka then made it three for Hwange in the 37th minute.

There was to be more drama as Triangle fought back in the second half and went level after goals but Nelson Melson and Lameck Nhamo. However its Hwange who took maximum points after Gift Mbweti struck two late goals to clinch the win. 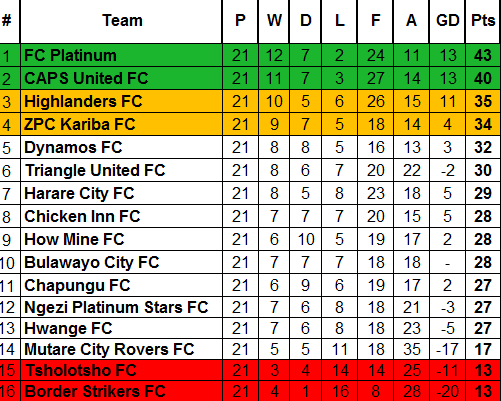