Highlanders cut the gap with win over Harare City

Highlanders gained ground on title rivals FC Platinum and CAPS United with a 1-0 win at Rufaro Stadium this afternoon.

Allan Gahadzikwa struck the all-important in the 59th minute of the game.

Harare City controlled the game in the first half getting a good number of chances to score. Raphael Manuvire struck the post while Jerry Chipangura failed to score from the rebound as Harare City dominated proceedings.

The two teams went into the half-time break with Harare City having the edge. In the second half Highlanders game back much improved.

The improvement showed when Gahadzikwa put his side ahead after good play from Tendai Ngulube who set him up to score.

Four minutes later Highlanders were stunned when the referee gave Harare City a penalty after alleging that Eric Mudzingwa had handled in the box. Highlanders players fumed as the ball had hit Mudzingwa’s hip. Missles flew down as  Highlanders fans registered their displeasure.

However Ariel Sibanda gave Highlanders instant justice when he saved William Manondo’s spot kick much to the delight of Highlanders players and fans.

Sibanda was called into action again when he saved Ronald Chitiyo blistering goal bound shot in the 78th minute.

Gahadzikwa almost scored his second in added time but had his effort saved by the line as Highlanders claimed a key three points.

In other matches played Chicken Inn beat Mutare City 2-0 with Lawrence Mhlanga and Ishmael Lawe scoring while goals by Toto Banda and substitute Nguwudzawo saw How Mine beat Hwange 2-0. 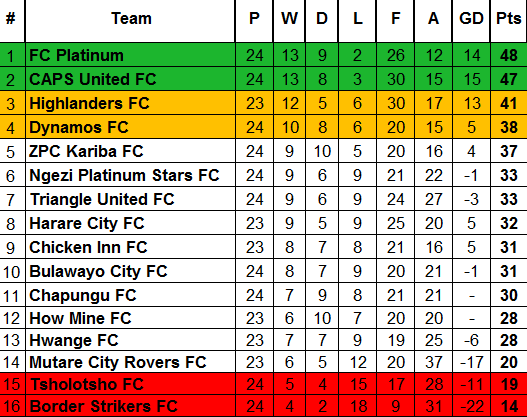