FC Platinum moved four points clear at the top of the table when they beat Dynamos 2-0 at Mandava Stadium this afternoon.

Dynamos had a promising start getting early chances but it was FC Platinum that went ahead through Kelvin Moyo’s header in the 10th minute after a corner.

FC Platinum controlled the game dominating possession and pinning Dynamos and forcing them to defend.

On the 30th minute mark Walter Musona saw his goal bound header saved on the line by Tatenda Mukuruva.

On the 43rd minute Musona was not to be denied as he scored the second with the ball coming of the back of his head .

Dynamos started the second half positively and introduced Wisdom Mutasa and Dominic Mukandi.

However despite the improvement Dembare struggled to score.Masimba Mambare came close in the 66th minute but saw his shot saved by Petros Mhari while Dominic Mukandi shot struck the cross bar with seven minutes left to play.

The result is a massive boost for FC Platinum hopes of their very first league title. 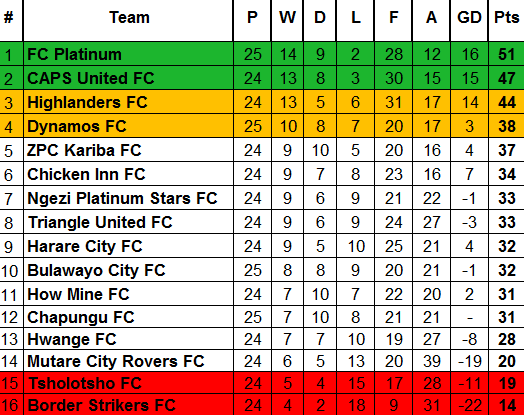