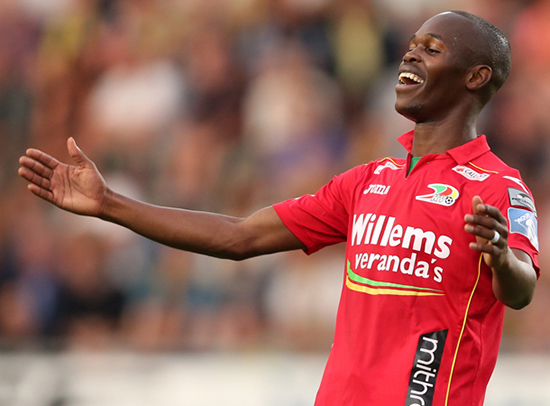 Zimbabwean international Knowledge Musona  has been named in a gambling scandal that his hit the Belgian top flight.

Musona is one of a number of players  cited by several Belgium based media outlets to be suspected of committing the offence of gambling in matches they were involved in. Investigations on the issue are now complete.

According to Belgian publication Sporza.be the Belgian ProLeague confirmed that “four or five players” were mentioned in the investigations of the committee, two of those player are Ostende striker Knowledge Musona and Waasland-Beveren goalkeeper Laurent Henkinet.

The report goes further and says prosecutor questioned the two players , and completed its investigation. The conclusion was that the two indeed have gambled on games of their own team.

Musona reportedly admitted and notified his club of his actions and cooperated.

It is now up to the Gambling Commission to decide whether the two fined. The players could be fined while there are reports that suggest criminal charges could also be slapped.

Musona has had a fine start to the Belgian league season scoring four times and is among the top goal scorers.