Real Madrid and Dortmund draw as Tottenham and Leicester win 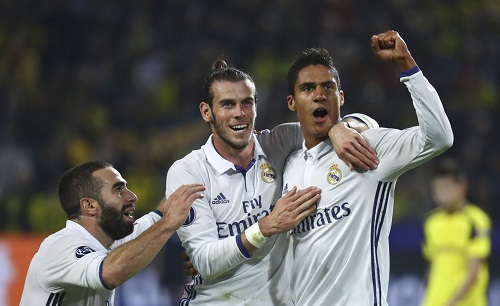 Cristiano Ronaldo scored in the 17th minute from a back heel pass from Gareth with Pierre-Emerick Aubameyang making it level two minutes before the halftime break.

Madrid continued their push, giving pressure to Dortmund .Real Madrid restored their leading through Raphael Varane who scored with a close range short. Schurrle’s late blast saw him level the score line for the host to secure a point in their bid to top  group E.

In other other matches Juventus managed to beat their host, Dinamo Zagreb four goals to nil. Juventus was on top of the game, with a splendid performance  and attacks from Paulo Dybala and Daniel Alves which saw Adrian Semper scoring in his own net!

Leicester City became the first English side to win their first two champions league games when they beat FC Porto1-0, with the goal coming from Algerian international Islam Slimani in the 25th minute.