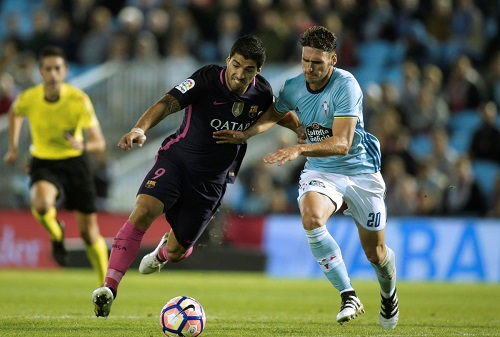 Barcelona were handed a 4-3 defeat by Celta Vigo in the Spanish La Liga .

The result saw Barcelona miss out on a chance to go top of the table after Real Madrid had been had played out a 1-1 draw with Eibar earlier.

Pione Sisto scored the opener for Celta Vigo after an error by Ter Segen, before two more goals were added through Iago Aspas and a Jeremy Mathieu own goal to put the home side 3-0 at halftime.

Barcelona looked set to launch a comeback after Gerard Pique headed in for Neymar converted a penalty to make it 3-2.

However Celta Vigo were determined to get another win over their more fancied opponents when Pablo Hernandez scored following another error by Barcelona goalkeeper Ter Stegen .

Atletico Madrid are now on top with 15 points after seven games with a superior goal difference to second placed Real Madrid.

Sevilla are third with 14 points with Barcelona occupying fourth place.