FC Platinum’s title challenge suffered a set back when they were beaten by Harare City while Highlanders secured a late victory against.

A Prince Dube goal in the 89th minute saw Highlanders continue with their push for the league title with a 1-0 win over Chapungu.

The match seemed to be heading for a draw with Chapungu having managed to keep out Highlanders but Ralph Matema and Prince Dube had other ideas as they combined well for the winner.

Earlier in the first half Highlanders had come very close with Simon Munawa striking the cross bar as Bosso dominated.

The win sees Highlanders move to within a point of log leaders FC Platinum who were beaten 2-1 by Moses Chunga’s Harare City at Rufaro stadium. Harare City took the lead after Grey Kufandada deflected shot in the 12th minute.

Minutes later FC Platinum were reduced to ten men with Gerald Takwara sent off for a rough tackle and reaction.

Harare City could have added more through Ronald Chitiyo who came very close towards the end of the half.

William Manondo added the second in the 67th minute with FC Platinum players furious with the goal as they felt he had been offside.

Walter Musona scored a consolation in the 90th minute as FC Platinum suffered only their third defeat of the season,

A Nyamhunga stadium a Tineyi Chitora goal saw ZPC Kariba edge Triangle 1-0. Ngezi Platinum came from behind to draw 1-1 with Tsholotsho while How Mine and Mutare City played out a goalless draw. 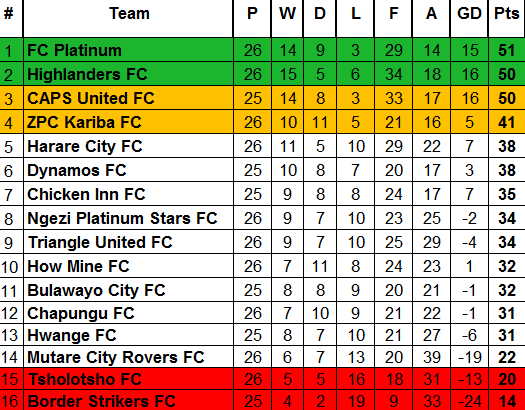