CAPS United shoot to the top

CAPS United have moved to the top of the Castle Lager Premiership after a 3-1 win over Border Strikers at Dulivhadzimu Stadium this afternoon.

CAPS United were on the attack from the start and it was a matter of time till the deadlock was broken.

Leonard Tsipa scored the opener with a diving header as the veteran striker tightened the grip as the league’s top goal scorer.

The goal saw Border Striker increase the tempo but CAPS United restored the lead two minutes just before half time when Simba Nhivi took full advantage of Livingston failing to clear the ball at the back.

Things went from bad to worse when Border Striker were reduced to ten men when Shalton Mazumba was sent off after fouling Ronald Pfumbidzai.

Border Striker struggled to threaten CAPS in the second half as the away side dominated play. Tafadzwa Rusike wrapped up the win when he came of the bench to score the third in the 88th minute.

In other matches Hwange put their difficult week behind them and managed to secure an away point against Dynamos. Takunda Sadiki put Dembare in front in the 11th minute but Oscar Lungu brought Hwange level in the 33rd minute.

At Barbourfields Stadium Bulawayo City secured a 1-0 win over Chicken Inn with Sipho Ndlovu scoring the goal in the 79th minute. 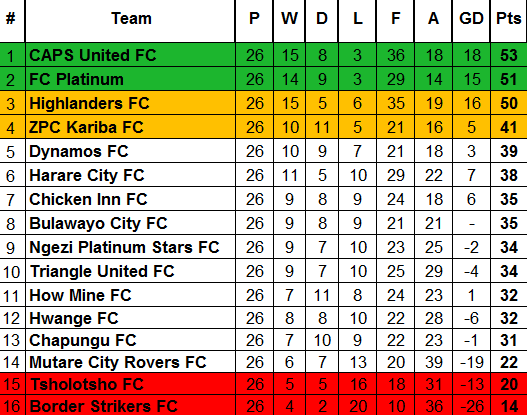