Injury blow for Real Madrid as defender Ramos is ruled out 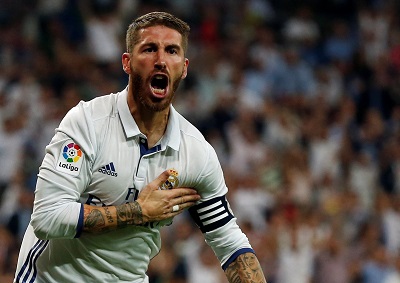 Real Madrid could find themselves between a rock and a hard place thanks to Sergio Ramos’ injury. The Spaniard picked up a knee strain in his country’s 2-0 win over Albania in their World Cup qualifier on Sunday and according to reports in Spain, the defender could be out of action for at least a month.

This comes at a time when Zinedine Zidane is under pressure to steer his side back to winning ways. Los Blancos have drawn their last four matches in all competitions, and conceded at least a goal in each one of those.

Ramos had an awkward fall during the match against Albania and was treated on the pitch. He was later substituted in the 80th minute as he seemed to be in deep pain. But speaking to reports during a post-match press conference, coach Julen Lopetegui said:

“Sergio’s injury looks like a strain and we hope that’s all it is but the doctors are the ones who have to determine what it is. He’s a very important player for us and his club.’’

Ramos is still an important player for Real Madrid and Spain despite conceding four penalties so far this season in all competitions both for club and country. He will now join the likes of Marcelo and Luka Modric in the treatment room at the Santiago Bernabeu.