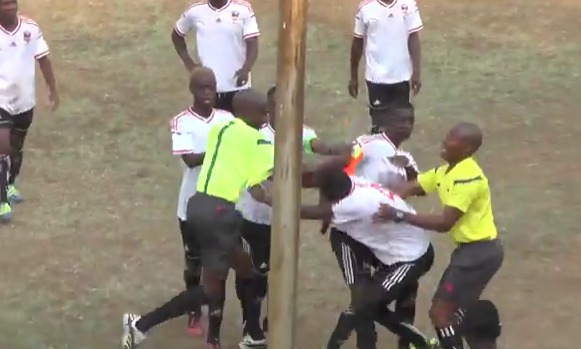 Victoria Falls Tigers player Lethukuthula Mathe who beat up a referee Bekezela Makeke during a Southern region Division one match last month has been handed a 10 year ban from football.

Mathe was upset with after receiving a red card and took matters into his own hands delivering an number of blows to Makeke until he was pulled away by fellow players. Makeke also tried to fight back.

Mathe managed to escape a life ban and five years of the 10 year sentence has been suspended on condition he does not commit a similar offence again when he returns to playing football.

The incident was caught on camera and went viral both locally and internationally.

ZIFA Southern Region chairman Musa Mandaza said the league condemned Mathe’s action and hoped he would reform after the punishment.