At Mandava Stadium Kelvin Moyo gave FC Platinum the lead in the first just after the half hour mark when he scored after Walter Musona’s free kick had been punched his way.

FC Platinum looked set to hold onto the precious lead but were stunned when Partson Jaure levelled matters with a well taken goal.

The result leaves FC Platinum in second spot a point behind CAPS United who could increase the gap to three points with a win over Dynamos tomorrow while third placed Highlanders could go above them with victory against Bulawayo City.

At Sakubva Stadium Mutare City handed Border Strikers a 3-0 defeat to officially send the Beitbridge side back to division one.

Mutare City were ahead as soon as the 1st minute when Stephen Sibanda scored. Chastern Ngondonga added a second to pile the misery on Border Strikers. Border Strikes missed out on a chance to get back in the game but missed a penalty.Kudakwashe Gurure then added the third for Mutare City when he converted a penalty awarded to the home side

In other matches Tsholotsho kept their survival hopes alive with a 2-1 win over ZPC Kariba while Chicken Inn register d a 2-0 victory over Chapungu. 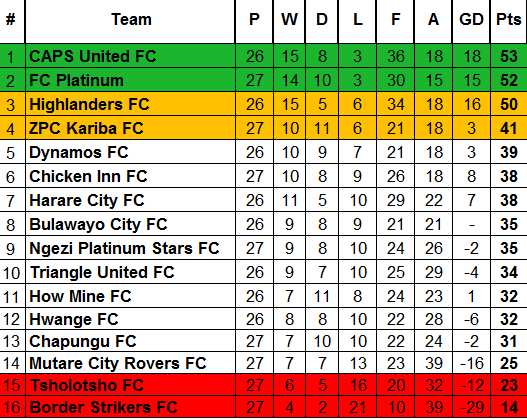