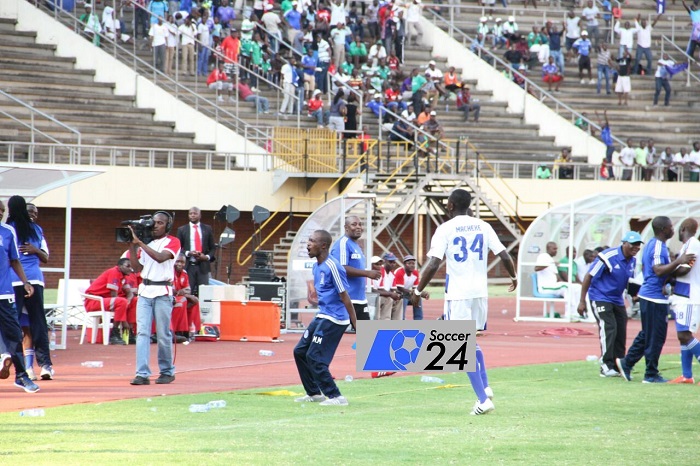 Dynamos players have allegedly been recorded criticising the technical team’s tactics in the aftermath of the 3-3 draw with CAPS United.

Dynamos let a 3-0 lead slip to draw with CAPS United. In an audio clip just over ten minutes suspected Dembare players are heard speaking about the game and what went wrong and what should have done

In the conversation that seems to be taking place while using public transport Dynamos players are heard tearing into the tactics of the squad as well as admitting the weaknesses of the technical team. The players also express their dislike for Murape Murape and feel Lloyd Mutasa needs a far better assistant.

Here are some translated parts of the conversation:

“What is that passing that the coach was now making us do, what is that type of play of pressing that we are now being made to play asks one of the players sounding annoyed

“The best way to delay is to keep possession, simple, its simple football explains another player.

“Why did the coach introduce Vale (Valentine Ndaba )and mufana Wizy (Wisdom Mutasa).Why were they introduced?

“Those guys (CAPS United players) knew that game was over,but we let them back into the game.

“Sometimes for football you need a strong technical team and compare yourself with the one the opposition has and you will see what level you are at.

“You cannot have our situation where Lloyd (Chitembwe) is assisted by Mathe (Mark ) and then we have Lloyd Mutasa being assisted by Murape we will be beaten already!

One of the players also revealed how he was dropped by Murape Murape for a game after he felt “the player thought he was now great after a good supporters had hailed his performance.

The player were in agreement that Murape is a difficult person to work with. Asked on why they were not addressing the issue with the manager Richard Chihoro ,the players felt Chihoro did not even want to hear about such things and it would be a waste of time.

One player openly admits he does not like the working conditions he finds himself in at the club and says if things remain as they are they will change club. I am not happy he says.

The players expressed doubt the current technical team would be changed and said the club was broke and more technical changes would not help the club’s cause.

There were also were in agreement that Mutasa despite all the criticism had the ability to change things around but needed a better assistant .Mutasa is a good coach players are heard saying he just needs better technical team.