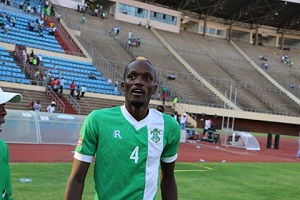 Caps United defender Dennis Dauda believes the gritty performance they exhibited against Dynamos on Sunday in a Castle Lager premiership encounter is enough to earn them the title this season.

The 2014 Soccer Star of the year was instrumental in Caps United’s come back as they levelled proceedings from a three nil setback with Dauda scoring a brace.

Dauda believes the character they showed in the sensational comeback against Dembare will spur tem on and win the coveted title.

“This character shows that we are made to be champions. Scoring three goals in seven minutes is no mean feat and again if you look at our game aganst How Mine then you will realise that this is the stuff that champions are made of,” said Dauda.

Dauda is hoping for a second bite of the cherry after missing out on the league title on the last day of the season when they faltered to Caps United when they needed a draw with Dynamos going on to claim the 2014 league title.