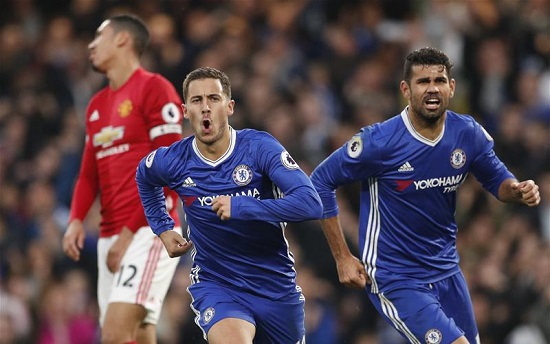 It was Mourinho’s worst defeat in the English Premier League.

Mourinho who was sacked as Chelsea boss just 10 months ago saw United go behind after only 30 secondS when Pedro beat both Blind and Smalling before rounding De Gea.

With Chelsea controlling the game and dominating proceedings Cahill doubled the lead in the 21st minute with a well taken volley.

Chelsea could have added more in the first half but the score line remained 2-0 at the break.

The early stages of the second half saw United impose themselves more as the sought a comeback with Mourinho replacing Fellaini with Juan Mata when play resumed.

With United pressing for goals Chelsea looked dangerous on the break. In the 62nd minute Eden Hazard made it 3-0 when he was not closed down in the box before shooting into the bottom right.

In the 70th minute N’golo Kante scored the fourth and his first as a Chelsea player ,controlling well before beating Courtois.