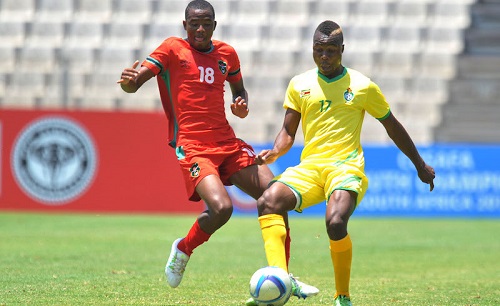 Zimbabwe’s stay at the Cosafa Cup U-20 Championship is hanging by a thread after failing to beat Malawi today.

The Young Warriors played out a goalless draw with Malawi to only pick up a point. Zimbabwe needed a win to boost their chance of progressing after being hammered 5-1 by Zambia earlier in the week.

Malawi dominated the early stages before Zimbabwe got more into the game after the 20th minute mark.

Nelson Chadya kept the Young Warriors in the game saving well just before half time. The second half saw Malawi fail to bury their chances as they dominated Zimbabwe.

With nine minutes remaining Malawi were unfortunate to not get a penalty when Bukhosi Ncube brought down Mike Mkwate in the box but the referee waves waived play on.

Zambia already has three points while Malawi has a single point. Malawi and Zambia play in the next group game.

The top teams in Groups B and D after the second round of matches will play a third game as a crossover fixture between those two pools, to ensure that most competing sides get to play three times. Only the top team proceeds to the next round. Zimbabwe will thus be hoping Malawi are beaten by Zambia.