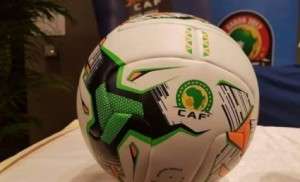 CAF has unveiled the official ball for the 2017 Africa Cup of Nations to be staged in Gabon.

The ball which was designed by Adidas was tested to suit the playing condition for the tournament.

Adidas are also the official providers of match balls for several competitions including the FIFA World Cup to widen their market base.

The competition will start tomorrow with the hosts Gabon facing debutants Guinea Bissau in the opening game.