We Have To Win In Harare Says TP Mazembe 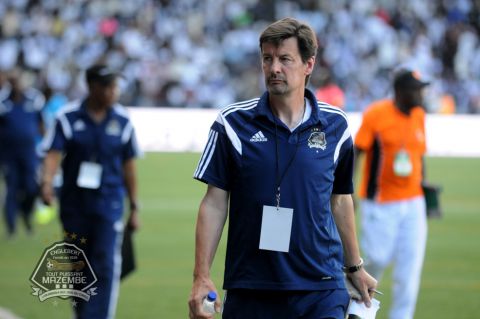 TP Mazembe coach, Thierry Froger, has said his team have no choice but to win in Harare in the reverse fixture of the CAF champions league first round qualifier against CAPS United at the National Sports Stadium on Sunday.

Speaking on the TP Mazembe Official website, Froger said the the whole team had to take responsibility for the result in the first leg where they drew 1-1 with the Zimbabwe champions.

“We must focus our preparation on the desire to raise our level of play. Even if we lost players, even if we made a too short preparation, further efforts are needed to present ourselves to the second leg with a lot of ambition,” he said.

Froger criticized his players for lack of character in the first leg which saw the hosts conceding a goal in seconds and eventually fail to conquer the visitors.

“The players who will appear on the pitch in Harare must prove that they have the level to play. In TPM (sic), it was not the case with all of them on Sunday,” he said.

Froger also rallied his troops by saying that there was no need to be complacent at home in Lubumbashi, and that there will be no need to be afraid in Harare away from their audiences as anything can happen in football. He said his guns must show a willingness to perform.

“In Lubumbashi, it was believed that it would be easy by the simple fact of coming with our audience to make a difference. It does not exist anymore, in the world, and Barcelona-PSG is an illustration of what can happen in football. In Harare, the solution to reach the [last] 8th, it will be first of all to have the will to score,” he said.