In the Castle Lager Premiership this afternoon there were wins for Highlanders, FC Platinum, Chapungu and Bulawayo City.

However, King Nadolo brought Highlanders level in the 13th minute before Prince Dube scored the winner in the second half.

FC Platinum secured a win on their return to Mandava, Stadium by beating Yadah 2-0. Gift Mbweti scored his first goal for FC Platinum in the 7th minute to give the home side a good start. In the 40th minute, Gerald Takwara added a second with a well-taken strike.

FC Platinum could have added to their tally but wasted chances while Yadah impressed with some enterprising play but could not make it count. Jairos Tapera was on the Yadah coaching bench but could do little as his side slumped to their fourth straight defeat.

At Dulivhadzimu Tsholotsho suffered a third home defeat when they went down 2-1 to Tsholotsho.

Tsholotsho wasted a great chance to go ahead when Nkosilathi failed to score from a penalty after Morris Kadzola had handled.

Bulawayo City got a penalty of their own in the 38th minute and Mukululi Moyo made not mistake to give his side a 1-0 lead.

In the 45th minute, Munyaradzi Maungaidze doubled the lead but Tsholotsho pulled one back through Tawanda Zinaka just a minute later. The second half saw no goals as Bulawayo City secured all three points

Chapungu clinched their first win of the season when they beat Harare City 1-0 at Ascot Stadium in an early kickoff. Tinei Chitora scored the solitary goal in the 13th minute. 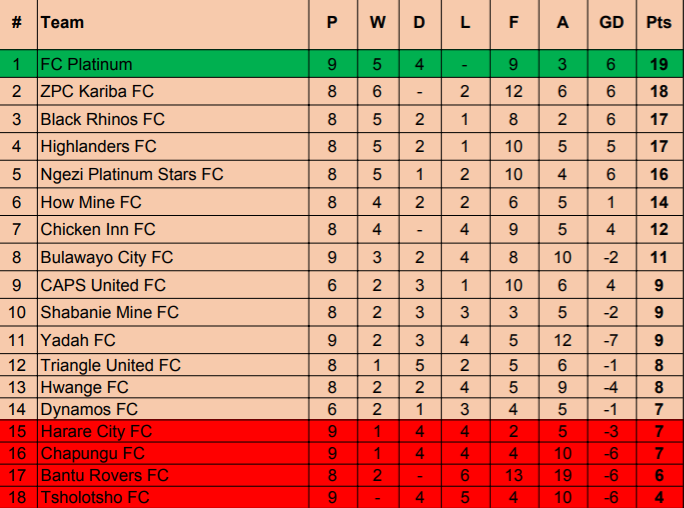