In the Castle Lager Premiership this afternoon Shabanie and FC Platinum played out a draw while Highlanders beat Triangle.

Highlanders returned to winning ways with a comfortable 2-0 win over Triangle at Barbourfields Stadium.Prince Dube gave Bosso the lead after 9 minutes with Rahman Kutsanzira’s providing the assist.

Rodreck Mutuma then doubled the lead with the winner on the stroke of halftime with a header after a cross from Bukhosi Ncube. Highlanders move to 20 points and are now in sixth place on the table after the result.

Shabanie Mine and FC Platinum played an entertaining Zvishavane derby at Maglas. FC Platinum surged ahead in the third minute through Talent Chawapiwa. However, the home side equalised in the 14th minute through Wellington Taderera.

Halftime came with the scoreline still at one all. The second half saw both teams threatening to score but cancelling each other resulting in the draw. FC Platinum stretched their unbeaten run to ten 10 games but have now drawn 5 of those games while Shabanie remains in 9th spot with 14 points.

At Baobab Stadium Chapungu ended Ngezi Platinum’s impressive winning streak as the two sides played out a goalless draw.  Ngezi Platinum dominated the first half but struggled to break down a very organised Chapungu defence.

The second half saw a more open game with action swinging end to end as both sides looked for the winner. Ngezi Platinum had more chances as the game game drew to a close  but Chapungu continued to defend well and could have snatched a win on the counter with Tineyi Chitora denied by the keeper. 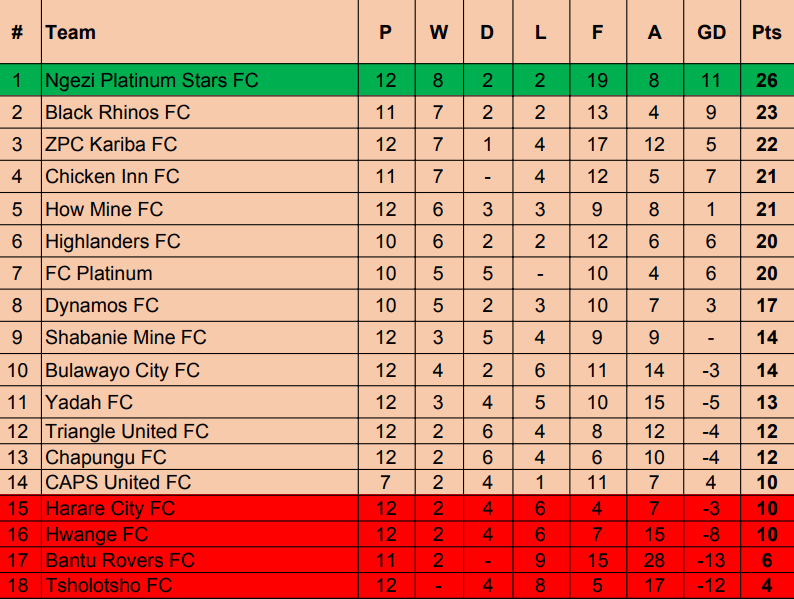